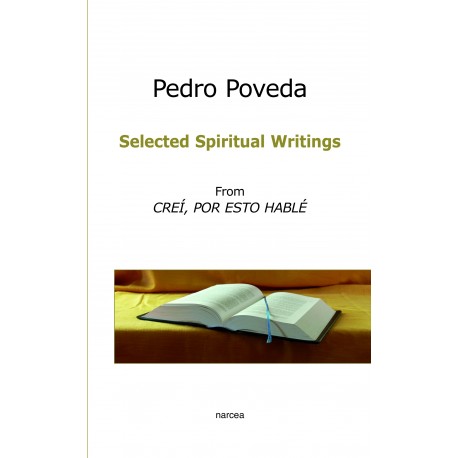 A rich and extensive range of writing by Pedro Poveda was preserved after his death in 1936 and is now being published in an eight volume Critical Edition, of which his collected spiritual writings, Creí por esto hablé (‘I believed, therefore I spoke’), is the first. The texts in this book have been freshly translated into English from that volume. They have been selected to present the key ideas for an understanding of Poveda’s project, the Teresian Association, which he founded in 1911.
Poveda wanted his collaborators to “know the same things according to the spirit of Christ and the Association”. Those “same things” are his concern here: the identity of the Association and its members, its purpose, the spirit which informs it, its educational and apostolic mission to “bring the good news of education and culture” to the modern world; how it is “a Work for difficult times”. Although these texts are addressed primarily to the members of the Teresian Association, they will also interest those who wish to know Poveda’s spirituality, addressing Christians engaged with education and culture in our world.

Pedro Poveda (1874-1936), Spanish priest and educationalist, founder of the Teresian Association, was born in Linares in the Andalusian province of Jaén, southern Spain. He began his educational work in 1902 in Guadix, near Granada, where he opened schools for cave-dwellers. In 1906 he was appointed a Canon of the Basilica of Covadonga in Asturias, in the north. There, an intense period of quiet prayer, reading, study of modern educational trends and writing followed. After an intensely active life of commitment to his educational and apostolic calling, Pedro Poveda was taken prisoner at his Madrid home on 27 July 1936, soon after the outbreak of civil war. On the following morning he was found in the Este cemetery in Madrid; he had been shot dead. He was beatified in Rome on 10 October 1993 and canonised in Madrid on 4 May 2003 by Pope John Paul II. The Teresian Association now continues its founder’s work in 30 countries in Europe, the Americas, Asia and Africa.

The spirit of our Teresian Work

Until Christ is formed in you

Prayer, the only strength

What is needed for an apostolic life

You are the salt of the earth

I believed, therefore I spoke

Live according to the spirit

Spirit and knowledge: the essence of our Association

To students, love for study

The eloquence of deeds

The present time calls for meekness

INDEX OF PROPER NAMES AND SUBJECTS