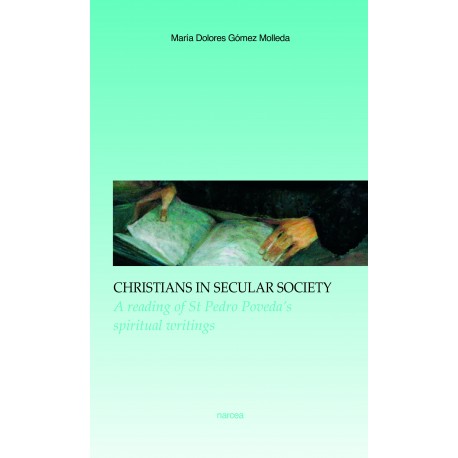 When St Pedro Poveda was writing in the early twentieth century, vast changes were occurring in Europe, the Western world and in Spain itself. What inspired Poveda to write so extensively? How was he able to maintain contact with intellectual and educational movements? What were the ideas that inspired his thoughts and gave him the energy to go ahead with his projects? What were the historical conditions leading up to his death in 1936? A study of the context in which Poveda wrote and acted, Christians in Secular Society allows the reader to understand more fully the period in which he lived and wrote.

The faith-science debate, the role of lay people in both Church and society, the early christians as reference points, the place of a “logical, just and christian” feminism, and human and social advancement through education and culture were key concerns for Poveda. He was inspired at one and the same time by a profound fidelity to the faith and the vision of a future societhy whose needs were not being met. Poveda’s writings can inspire today’s readers too, aided by this valuable publication, which is a translation of the introductory study in Volume I of Obras, the eight-volume critical edition of St Pedro Poveda’s works.

María Dolores Gómez Molleda was Professor of Contemporary History at the University of Salamanca, having also held chairs at the Universities of Santiago de Compostela and Madrid. Dr. Gómez Molleda specialized in the history of reform in education, culture and politics and published widely. She dedicated herself to research of Pedro Poveda, Spanish pedagogue and initiator of a reform movement in education, which in the early years of the Twentieth century crystallised as the Teresian Association, an association of lay christians. Dr. Gómez Molleda was also the General editor of the critical edition of the Works of Poveda, in eight volumes, the first of which, Creí, por esto hablé (“I believed and therefore I spoke”), was published by Narcea, s.a. de Ediciones in 2005.

Lines of thought and realisations

Historical ‘tempo’ of the writings